The Edge of Tomorrow's Habits

We are what we repeatedly do. In some form or another the power of habit and a repeated and focused effort towards a vision or goal has transformed individuals and moved society forward. A habit is something we regularly do without consciously thinking much about it. It is an automatic mental and behavioral activity; a pattern of behavior. ((http://www.bmartin.cc/pubs/comments/1302habits.html))

How much time and focus have you dedicated to being mindful of your daily habits?

If the answer is not much, then there is plenty of opportunity for a tremendous amount of personal growth. With time, effort and a better understanding of the mechanics of habits you can begin to better self-regulate yourself, and design a much happier and successful lifestyle.

In The Power of Habit, Charles Duhigg dives into the science of habits and lays out a framework for understanding how habits work and how to change them. 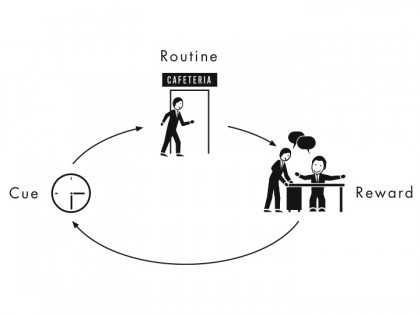 Duhigg talks about the concept of a Habit Loop, a cue, routine and reward,which is the pattern at the core of every habit. ((http://charlesduhigg.com/how-habits-work/))

Cue is trigger that tells your brain to go into automatic mode and which habit to use. Routine is a physical or emotional action. Reward helps our brain figure out if a particular activity is worth remembering in the future.

You can see examples of Habit Loops all around you. Looking back at home, I can see some examples from my mother.

As someone enters the house (cue), she prompts them to take off their shoes (routine). After she sees the shoes on the floor mat, she appears more relaxed and preserves her clean floors(reward).

In the digital age, technology has shaped our behaviors and habits, just look to the phone and mobile apps. How much do you habitually check your phones to see if you have any notifications, especially from social media or other communication apps. Notification, flashing blue, green or red light (cue), check phone (routine) and enter dopamine loop (reward).

Dopamine is a created in various parts of the brain. It neurotransmitter that helps control the brain's reward and pleasure centers and other things. ((https://www.psychologytoday.com/basics/dopamine))

With the internet, twitter, and texting you now have almost instant gratification of your desire to seek. Want to talk to someone right away? Send a text and they respond in a few seconds. [..]

It's easy to get in a dopamine induced loop. Dopamine starts you seeking, then you get rewarded for the seeking which makes you seek more. It becomes harder and harder to stop looking at email, stop texting, or stop checking your cell phone to see if you have a message or a new text. ((https://www.psychologytoday.com/blog/brain-wise/201209/why-were-all-addicted-texts-twitter-and-google))  Susan Weinschenk Ph.D.

One way you can unplug from this dopamine loop by modifying your environment. With mobile devices, you can disable notifications, move social apps from your phone's home page or even uninstall them if you're that brave. I took the leap recently and removed Facebook, Twitter, and Instagram from my phone and I'm still alive, the world hasn't exploded and I haven't gone insane... yet.

Modifying your environment is an example of controlling your cues, and thus helping you establish new routines.

Life is Filled With Cycles.

Watching and reflecting on the movie The Edge of Tomorrow, there was a strong parallel towards the importance of repetition and cycles towards habit development and achieving goals.

The Edge of Tomorrow

Here's some background on the movie ((http://www.imdb.com/title/tt1631867/plotsummary)), leaving a few key details out as to not spoil the movie:

The planet is invaded by aliens called Mimics, who ravage the planet causing the world's armies to join forces in attempts to destroy them.

William Cage, played by Tom Cruise, is ranked Major in the Army. Cage has never been a part of any combat and has little physical ability to be useful in a battle. Some internal politics lead to his demotion and he's forced into battle after threating to expose high solider casualties that the government is trying to cover up.

The military dumps Cage off to Heathrow Base, where they plan an invasion against the aliens, who intel says are located on a beach. The mission goes horribly wrong. The soldiers are slaughtered by the Mimics, and although Cage has no combat experience, he somehow manages to kill a special Mimic, called an Alpha, whose alien blood enters and mixes with Cage's blood before Cage dies from his wounds on the battlefield.

The next day Cage wakes up, thinking it was all a dream, and goes on to follow the same series of events that happened before and dies on the battlefield again. He wakes up the next day and realizes that he is stuck in a time-loop, forced to relive the same day and the same brutal battle, fighting and dying, over and over again.

Each time, Cage tries to prevent the deaths of his squad members and warns them that the invasion is a trap, but no one listens. It's up to him to find a way to find a way to save the world with his new found ability to reset the day. With each battle and each death, Cage learns a little bit more about the battlefield. Starting with zero combat experience, each new day, gives him incremental lessons, and he is able to engage the aliens with increasing skill. Every time he "fails", the day resets and gives him an opportunity to reflect and adapt as Cage prepares for battle again. The battlefield becomes his practice ground and at each attempt, he develops a particular set of habits to advance a couple of steps further along the battlefield.

Every day you wake up is another opportunity to get better. Time will pass regardless of whether you decide to act, remember, indecision is a decision. It's up to you to be mindful and take advantage of the time you have.

Life is One Long Practice Session.

"Everything in life worth achieving requires practice. In fact, life itself is nothing more than one long practice session, an endless effort of refining our motions. When the proper mechanics of practice are understood, the task of learning something new becomes a stress-free experience of joy and calmness, a process which settles all areas in your life and promotes proper perspective on all life's difficulties" The Practicing Mind

Being aware and in better control of your habits, you take on a practicing mindset, practicing the behaviors which will help you grow and improve your life. When you think of improving your habits as active practice, you're practicing in the game of becoming a better you.

With each action and the passage of time, you want a way to engrain the methods of your successes and the learnings from partial failures into each ongoing session. I use the term partial failure because it hasn't fully become a failure until you fail to learn from a mistake. This shift in perspective towards failure is important in accepting the reality that mistakes happen and it will help lower the resistance towards going beyond your limits, which WILL bring on mistakes.

Some of the key areas I've found for removing bad habits and building good ones have come from controlling the cue, through changing environments, people I associate myself with, times in which I do certain habits as well as the mindset and attitudes I have towards the habit and faith in my own potential for change.

The second area is changing my rewards from extrinsic motivation, which occurs when we are motivated to perform a behavior or engage in an activity to earn an external reward or avoid punishment, towards intrinsic motivation. Intrinsic Motivation involves engaging in behavior because it is personally rewarding; essentially, performing an activity for its own sake rather than the desire for some external reward. ((http://psychology.about.com/od/motivation/f/difference-between-extrinsic-and-intrinsic-motivation.htm)) You have more control over your internal motivation, so it is more reliable over time.

To get there I start with purpose and understand the Why behind the things I do. Often trying to build behaviors towards the person I want to become in the future. By aligning your habits with your identity, you make a long-term commitment and personal investment of small actions invested over time to mold you into your new identity.

Build systems or processes around your habits to take the learnings from your daily practice to solidify your growth and make these behaviors a core part of you, which will reduce the strain on you to maintain over time.

There is tremendous power in consistency if you are consistent about the right things. Live today. Repeat your learnings. Break bad loops.

Be systems oriented in that you focus on executing what you intend to do rather than focusing on the goal without making consistent efforts in getting there.

What you will gain from all of this is more willpower, persistence, discipline and a life you have more control over. The edge of tomorrow's habits starts today.

"Isn't it nice to think that tomorrow is a new day with no mistakes in it yet?"